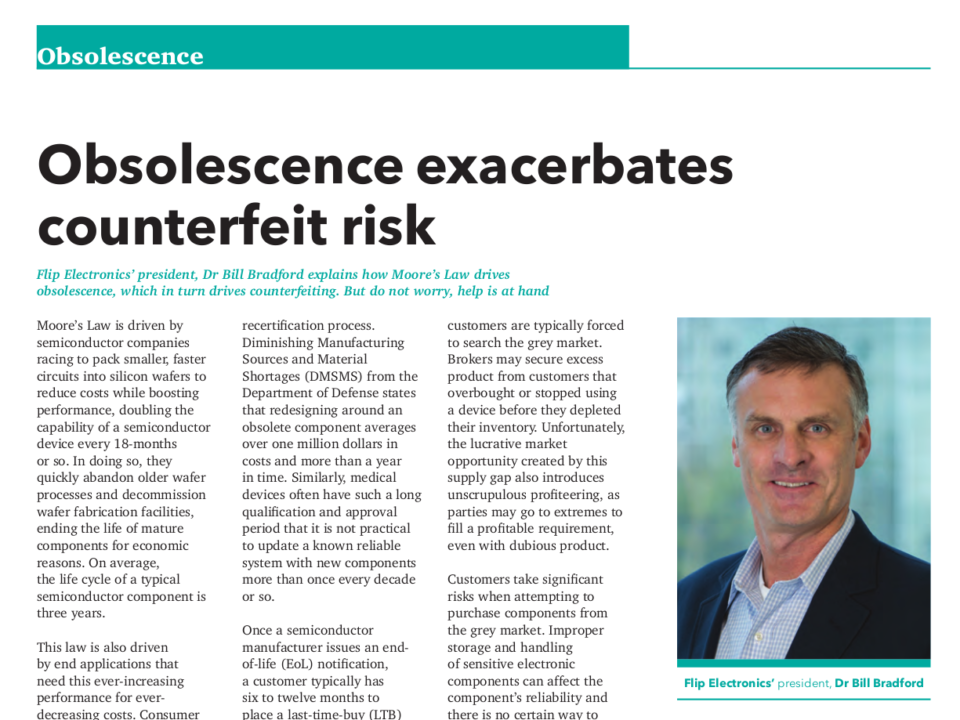 This article was recently published in the November 2020 edition of Electronic Sourcing Magazine. You will find it on page 16 and continues on page 18 of the November edition. Please read below.

Moore’s Law is driven by semiconductor companies racing to pack smaller, faster circuits into silicon wafers to reduce costs while boosting performance, doubling the capability of a semiconductor device every 18-months or so. In doing so, they quickly abandon older wafer processes and decommission wafer fabrication facilities, ending the life of mature components for economic reasons. On average, the life cycle of a typical semiconductor component is three years.

This law is also driven by end applications that need this ever-increasing performance for ever- decreasing costs. Consumer markets, such as cell phones and the Internet of Things (IoT), need smaller, cheaper devices to spur ongoing adoption. Communications and processing-intensive applications such as artificial intelligence and networking gear require more raw performance.

But what about industries that will not or cannot adapt to evolving technology at the same pace? Military and aerospace applications, due to their complexity and extreme reliability demands, may need to support an electronic system for many years, even decades. The cost and time to redesign a system to accommodate a new semiconductor device can be prohibitive, especially when considering the added costs of upgrading integrated software and firmware, plus the extensive recertification process. Diminishing Manufacturing Sources and Material Shortages (DMSMS) from the Department of Defense states that redesigning around an obsolete component averages over one million dollars in costs and more than a year in time. Similarly, medical devices often have such a long qualification and approval period that it is not practical to update a known reliable system with new components more than once every decade or so.

Once a semiconductor manufacturer issues an end- of-life (EoL) notification, a customer typically has six to twelve months to place a last-time-buy (LTB) before the component is no longer available. That LTB may not cover the full production requirements for several reasons. It can be difficult to accurately forecast demand over multiple years or to anticipate upside requirements. Often customers will plan a redesign but unforeseen circumstances cause delays, creating additional requirements for the EoL device. Lack of funding for a multiple-year purchase can force a customer to just buy what they can and deal with the EoL issue down the line. Some estimates suggest that LTBs cover only an average of 60 per cent of total EoL requirements.

Once LTB purchases are exhausted, customers may first turn to franchised distributors, which could have remaining factory inventory. When that is depleted, customers are typically forced to search the grey market. Brokers may secure excess product from customers that overbought or stopped using a device before they depleted their inventory. Unfortunately, the lucrative market opportunity created by this supply gap also introduces unscrupulous profiteering, as parties may go to extremes to fill a profitable requirement, even with dubious product.

Customers take significant risks when attempting to purchase components from the grey market. Improper storage and handling of sensitive electronic components can affect the component’s reliability and there is no certain way to confirm parts were controlled appropriately. Worse, once components have left the manufacturer or authorized distributor, traceability to a product’s origins and verifying its authenticity gets more difficult and uncertain. Counterfeiting is widespread because of the profits associated with hard-to-find semiconductors and the difficulty of detecting non-genuine or compromised parts. Counterfeit semiconductors are estimated to cost the US semiconductor industry $7.5B annually, according to the Semiconductor Industry Association.

Counterfeit components may be parts that have been previously used, reconditioned and represented as new. They may be a completely different part but relabeled to look like the original. The part could be just an empty package, or in some cases, a fully reverse-engineered copy of the original component. Counterfeiters have become more sophisticated, requiring advanced testing and screening to detect. It is virtually impossible to guarantee a component purchased from the grey market has the functionality, quality and reliability of a known authentic part.

A bad chip in a consumer device would certainly be an annoyance. However, counterfeit or compromised components are of particular concern to high-reliability applications such as military, aerospace and medical devices, where a faulty component can endanger human lives and compromise national security. Yet these are the industries that may have the highest likelihood of counterfeits in the supply chain because of the long product life cycles.

By merging, cleaning and analyzing the data sets from IHS and ERAI, it was discovered that 60 per cent of ERAI-reported suspected counterfeit incidents involved products that have been reported by IHS as EoL or discontinued. To limit risk, equipment makers must make every effort to buy authentic parts from an authorized source: either direct from the manufacturer or from an authorized distributor. While most franchise distributors focus their inventory on newer products to increase their inventory turns, some specialty authorized EoL distributors focus on supporting the long tail of demand for discontinued components.

As an authorized distributor for leading suppliers, Flip assists clients in the sourcing, pricing, and delivery of all their component needs. These services help avoid costly shutdowns and purchasing from the grey market. 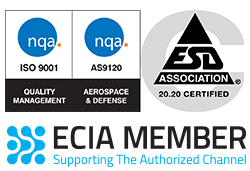 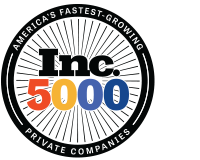 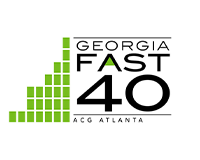